Digging into the roots of the JO club phenomenon, I should not be surprised to find myself stepping squarely into the Meat Market of New York, years after its disappearance.

I have been to New York City exactly once, spent a handful of days seeing my husband’s play get its off-off-Broadway debut. That was in the very-late 20th Century when our partnership was still sexually exclusive. I was far too excited about his show to be thinking about the lost fantasies of my youth—visions of urban men cruising and tricking publicly in seedy, seething neighborhoods—so I passed through New York with little more impact than making a connecting flight at LGA.

But today, as I research my book, every tiny detail leads me through the tenuous fragments of our collective history and the intense cultural phenomenon that was the Meat Market. I was a disco twink in the late ‘70s, dropping acid and partying after hours in my Central Illinois enclave of distant homo debauch in college. I read Honcho and Mandate and dreamed of going to where the real action was, where I could dig into the mansex I devoured surreptitiously from the midst of the corn and soybean fields. 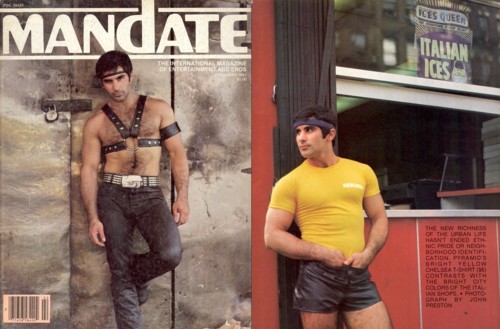 At 17 and 18, I was learning not to fall in love from JB, my first crush with the emotionally sadistic side, and at 19, I was making regular trips into Chicago to visit Man’s Country, my first bathhouse. I was, at that point, not interested in “wasting my time” at bars. At 19, I could legally go to a bathhouse but I could not get into a gay bar anyway. I just wanted to start putting my penis everywhere I could and taking every strange cock I could find into my mouth and my ass. In this way, I did experience the echoes of the Meat Market, the actual culture and network of open, anonymous and semi-public sexual adventure exploding among the gay men of that decade.

But I never went to the Gold Coast, Chicago’s venerable leather bar, nor did I ever want to go to the Hellfire Club, the secret society of the City’s leather and SM culture. It didn’t appeal to me, although the artwork of Tom of Finland was incredible and intriguing, I was not into “the rough stuff” so I stuck to Man’s Country and later, The Bistro, Broadway Limited and other discos I could finally play in when I hit 21 in 1981.

But in 1981, the party was in its final act as HIV began to invade our common psyche and AIDS began to kill us. We denied vehemently the pronouncements of “God’s vengeance” laid upon us by the moralizers without and within the disparate gay communities and those who had always condemned us, and we kept partying for a couple of years but it was like the twitching and ejaculating of the hanged man whose body denies its end. The party was over and we simply were not ready to leave.

In some ways, it makes perfect sense. This massive buffet of sexual and social experimentation was spread out before us and we had an opportunity to taste everything, or to at least imagine everything, and we naturally began coming back to those experiences that appealed most to each of us, that best fit our taste.

More to come. Please feel free to share your own memories, personal experience, comments and photos in the comments section.