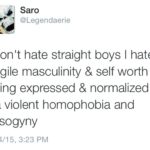 While the quote above may be a bit harsh, I think it has a good bit of truth. The most homophobic people I’ve met (both men and women) where the people the most insecure of their own sexuality. Frail sexual identities often hide themselves in over sexualized role play. Hence homophobia and misogyny tending to come together as a package deal : when a person is not ready to accept that he or she could be different from the Sexual Norm, that person tends to define sexual roles strictly to feel more secure in their behavioural choices. Psychological appeasement through rigid role modelling. To the contrary, when a person is at ease with his or her sexuality, that person won’t mind expressing him or herself as he or she truly is, the culturally assigned genderization being considered unimportant because the confident person knows that he or she cannot be defined externally by a Social Norm.