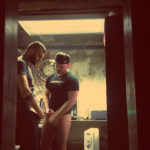 But… it looks like a marketing shot to me. It’s the very specific Manhunt brand of hyper-masculine trade, buff and dirty and looking a lot like straight buddies. It is free of the derided girliness of many gay men. It’s putting on a show for us. It’s not real. It’s posed. It’s pro-porn, even without the close-up on the dick and the money shot.

And it has its place, but when I see guys like this in the real world, what I perceive are personal barriers, conceits designed to fit into a popular idea of being a man, not authentic but manufactured. Whoever these guys are, I see boys trying on ideas of manhood and perhaps lost in the roles they affected to find themselves.

And it’s nothing new. This kind of fantasy shot has been the bate fuel of countless masturbators forever. Masculinity is hot, even if it is more often than not a facade, a fake-it-‘til-you-make-it strategy.

And while many men consider me in this category just by dint of being a bodybuilder, when they expect me to play the role of daddy, or big brother or army captain or cop, I just can’t go there. It turns me off. I have gotten to a point where I am turned on by the very authentic man, including his moments of genuine vulnerability. I’m attracted by real courage more than he-man posing.

Sometimes, a beard and a tattoo is an authentic expression of a man. For many, this is who they are but I can’t help but see them as costume pieces we put on to fake a personality until we’ve convinced ourselves that this image is who we really are.

When I encounter a man who is fully himself—healthy, eager and engaged; free of shame, beyond self-obsession and pushing through insecurity—I am wildly turned on. I recognize the paradox of a “real” man with all his strength and vulnerability and fragility coexisting together. When a man is not about the objects he attaches to and the image he projects, but excited by the experience of living in the moment, I can’t help but want to share intimacy with him. He’s got what I want and it’s pretty rare in this confused, image-obsessed culture.

A great photo can be crazy hot, inspiring, sperm-inducing bate fuel, but a photo is not reality. A fantasy is not human interaction. A costume and a role played is not the essence of any man. At best, it’s a crutch, a temporary means of finding out who one actually is beneath the artifice. That true self doesn’t show up until a man drops the armor of who he thinks he is, who he’s trying to be.

You can’t fake authenticity. Eventually, you have to take off the ballcap, look up and into the eyes of the man before you and connect to the living, vulnerable fellow man both in front of you and inside of you. This image is a fantastic, artful depiction of an idea. It tells a rich story. It is art.

But it ain’t real. My personal mission is to be more real, more true, more authentic. Key to that mission is being able to see how I, and my fellow men, fake it until we make it.

(Your honest feedback is welcome in the comments below. Please don’t email me with your responses so nobody else can see. Share with comments.)