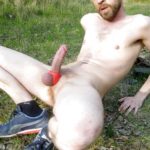 My favorite kind of cock ring.

So this came across my feed today… I love science!

And all of this is, of course, bullshit. Most men have expertise in getting themselves off and have lifetimes of research under their belts (literally) with getting to Yahtzee in no time, or in making it last, or riding the edge. Virtually all men possess this personal mastery.

But… being a writer trying not to construct redundant paragraphs, I will still use those oxymorons. Sparingly.

And here’s why it matters to me: There are important differences between solosex and sex with others, even if the specific frictional action is otherwise identical. The big deal is, of course, the difference between the feedback loop of action, mental response and reaction that happens when one is stimulating oneself, and the need to communicate with another human when one is not inside their head, experiencing the results of one’s actions instantaneously.

I have jacked off hundreds of men and been jacked off by hundreds of men. I don’t like to think of myself as a handjob expert because there is only one penis with which I am truly an expert. My takeaway from all these years of stroking is the same as every other kind of sex with others: There’s a complex web of elements that need to achieve reasonable compatibility to make it work. I need to have a compelling, innate, positive response to how that person looks, acts, smells, tastes… They need to have a corresponding positive response to me and we need to have compatible technique, including the ability to adjust in real time to meet each other’s needs.

In other words, you can’t take for granted that what works for you will work for me… or him or him or him. We may be able to get off, but to have good sex—including great handjobs—you’ve gotta have chemistry and you’ve gotta be paying attention to each other from instant to instant. You have to both be on the same ride together.

But I will disagree with you.

See? It’s not as easy as you thought.

Here’s the initial publication of my interview for VICE. It should go live in the USA by Friday!

This weekend, I invited three bate buddies over to screen Spunk. It was a fascinating, mind- and crotch-expanding exercise. We watched, mostly in silence with a few comments throughout, and then we all gradually got our dicks out and got off together. It was a fantastic session with beautiful penises, great energy and four intense orgasms.

Afterward, I asked, “So, how did you like the movie?”

Da Silva’s work is more complex and layered. It is not single-mindedly urging the viewer to orgasm, but engaging our minds and feelings—along with our libidos—with a playful, humorous, even absurd angle throughout. For that reason, viewers may not know how to categorize it. It may confuse or disorient audience members—especially those conditioned to seeking the manipulative porn we all know and love and stockpile in our spank banks—since we like to know what we’re looking at. At the same time, there are a lot of moviegoers who love having our genres mixed in a holistic way. I think da Silva has arrived there. I think Keller is getting there.

(Note that Keller’s work is crowdfunded. We all get to be patrons of his work and if you like the direction he is taking with Colby Does America, you should consider throwing him a little love as I have done.)

All that said, I will point out that we all were hugely turned on and had fantastic sex immediately following the movie. The last third of the film definitely inspired us (no spoilers here—sorry and you’re welcome) so it’s not totally without specific dick inspiration. It just makes you engage with your mind rather than disengage and it makes you see through an artistic lens to get there.

I enthusiastically recommend Spunk, just watch it with an open mind and be ready to either get off afterward… or not. In any case, this film does what my favorite art films does. It crawled into my brain and sparked lots of new thoughts and ideas in the hours and days that followed.

A bator/edger knows that his sexual impulse is an innate, human power that recedes from us when we ignore it or belittle it. He does not disrespect or second-guess the internal urging of his libido and because he has agreed to give in to it, he doesn’t deflate it with negative self-talk. He loves that internal urging and makes a promise to it that he will give it the attention it asks and when that opportunity arises, he fulfills the promise and indulges that impulse.

Bators know that sexual desire is something to sink into, to temporarily immerse in and that it is possible to direct the mind fully into the penis and all that radiates from it in the moment of engagement.

The edger rarely just jacks off. He is unlikely to waste time on a utilitarian orgasm. Indeed, getting off is not the objective but only an end to an exquisite journey and he is in no hurry to end that journey.

Edgers are not the outlaws in the sexual community. They are the gurus of sexual experience that the rest of us should be seeking out for wisdom.