One of the most fascinating pieces of Jacks culture regards the many assumptions surrounding why we jack off together. The most common assumption is that it’s all about “safe sex” and HIV. In other words, fear. There’s an idea that we’re afraid of getting HIV or transmitting HIV so we are essentially settling for this “fake sex.”

In my experience, and this is just my perception so you get to disagree all you like, those of us who are sexually active are often unsuccessful at suppressing what we really want. Our strongest sexual instinct is to push further, not to retreat. We want genuine pleasure, satisfaction and authenticity in our sexual experiences, and we rarely are willing to “settle” for more than a short period of time, although for a tragic number of people, it’s easier to just give up on sex altogether than to settle for what they don’t want…

It’s like dieting (and there are loads of parallels between our desire for sex and our desire for food). A few people will be able to curb their desire to eat, chew and enjoy the foods they crave, but this almost always results in cycles of control and release. We can control the cravings and limit ourselves to a point, and then we release that control. For serial dieters (those familiar with riding the “diet rollercoaster”) it is painfully clear that diets are often a “two steps forward, three steps back” proposition where they lose weight and then gain it all back plus a little more. For many successful at weight loss, a deliberate release (a “free day”) built into a diet means they can keep their progress on track.

Accepting and embracing what we really want works better than trying to suppress it altogether.

In sex, like in dieting, we are trying to suppress strong, primal forces that are active in us all the time. Those forces only go away when we can no longer sustain them biologically and when we are successful at suppression, it almost never leads to happiness. Eventually, we go for what we want, binge and deal with the regret later… often by consoling ourselves with more binging.

I know I’ve been tapping the well of this factoid a lot lately, but its significance is important: Jacks clubs formed in earnest before HIV. A number of men (and their numbers were in the process of expansion well-before AIDS appeared) organized to jack off together out of desire. There was no such thing as “safe sex

There is a primal hit we get from every specific sex act, and there doesn’t seem to be any end to the specifics. We want and we explore and when we find what gets us off, we want to go back and get off again and again. We’ll keep going back and digging deeper until we don’t get off anymore, and then we look elsewhere. At some level, men will always desire novelty as a way to get off, but some things click for extended periods of time for us, and when those things are missing, we feel unsatisfied.

I’ve been digging through the old newsletters of the SF Jacks (San Francisco’s venerable JO club, most faithfully inspired by the NY Jacks) and I am so delighted by what I find there, though I have read it many times before. It is a fantastic window into the ‘80s and into one of the main taproots of Jacks culture.

One piece of history I find particularly of interest—both in the SF Jacks and the NY Jacks who originated this philosophy—is the focus on JO as proud fetish. There was a very clear directive to prospective members that this trip was not for tourists, but for the repatriated prodigal sons of that rich land. It is spelled out with absolute clarity in the original rules of SF Jacks, based almost verbatim on the original rules of the NY Jacks:

RULES OF THE JACKS

Jerking off is the reason for our club’s being. The San Francisco Jacks is a meeting of men who wish their primary sexual outlet to be J.O. in the company of other likeminded men. For a very significant number of members, jerking off alone and in groups large and small is not their central, but their exclusive sexual activity.

That should tell you a few things: The original Jacks felt the need to make a strong statement that was specific and erotically-centered. “You must really want this” was, and still is, the core message.

And consider the history of that time and place: These rules were written in the San Francisco of 1983. AIDS was a present spectre in the gay community and that period of time was already one of terror and fear-motivated choices. A wave of death was already washing over the greater community. Yes, the original NY Jacks version of the rules was written in 1980, a year before the epidemic had even been heard of, but look at the rules. There is no revision for the times, no mention of “safe sex.”

The spirit of the Jacks was the power of specific lust, a particular sexual taste and a sense of having discovered something extraordinary that had to be shared and evangelized… And protected from dilution. They saw all the relationships, cruising, tricking and hierarchy of sexual acts as a morass of needless complication and confusion. They didn’t judge sex or relationships, many simply felt that for them, it all missed the mark…

They sought and found, through simply jerking off together, a connection of equals (“likeminded men”) and a reconnection to a genuine, personal and primal nature once buried under social ritual and sexual politics.

(Your comments are always welcome. Please leave a personal note or question and please do share my blog with friends.)

Interesting article. I like it when the standard narrative is blown apart in favor of quantifiable facts… I would note that although it was a pretty good-sized sample, the face-to-face interview methodology may have had more impact on results than they estimated…

I just finished watching Gay Sex in the 70s, the 2005 documentary about the period between Stonewall and AIDS, roughly 1969 through 1981. It was a rich experience of nostalgia, humor, sadness and history. It left me feeling grateful to be alive, to have survived, and to have benefitted from the experience of those who were much deeper into the scene than I ever was…

I watched the film for source material, to find photos and clips to use in my kickstarter video, but also to get a better sense of the culture out of which the New York Jacks and the entire JO club movement sprang. I’m amazed that an enduring fetish culture centered on safer sex came out of the same cauldron where the most reckless sex was being celebrated 24/7, and yet it makes a lot of sense to me too.

A big part of my experience of the 70s and 80s was drugs, and I began my recovery in Aspen, Colorado in the summer of 1989. That was a community and a time that was saturated with cocaine. Almost everyone I knew snorted coke. It was a deeply addicted community but within it, there also existed an intensely effective recovery community. I think whenever you have an extreme cultural phenomenon in place, some will reject it and forge their own path, and a sort of complementary phenomenon will flourish.

I had my share of anonymous and definitely risky sex in the 70s and 80s… and drugs. I was high on something every day for 14 years and had already fucked, sucked and stroked with well over 1000 men by the time I met Eric. I explored the dangerous places and met my own dark side and it got very different when I A) stopped using drugs and B) started exploring JO clubs. Partnering with Eric was nothing short of transformative, but I still look back and am amazed at my survival… 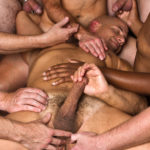 An outtake from a Rain City Jacks photo shoot. The final selects will not show any faces, but this one shows one… mine.

It makes a lot of sense to me. Shy men are often terrified of having to impress strangers with witty banter or displays of fashion sense, status or wealth. There’s often an idea that one must pretend to be someone else in order to win the attention, if not the affection, of someone appealing—a sense that there is an ordeal of social artifice one must pass through to get to what one desires.

JO clubs level the playing field in many key ways: Everyone is naked, so there’s no need to spend time dressing to impress. Conversation is completely optional although simple courtesy is standard practice, and being naked makes class distinctions far less obvious. Add to these “social simplifications” the simple fact that everyone is immediately available for open sexual activity with and among all others present and all significant barriers for shy men turn out to be completely down. It is, in many ways, an ideal environment for the shy man… at least, the shy man who wants to share a masturbatory experience with other men.

My guess, and it’s just my personal sense without any data to back it up, is that Jacks are more likely to identify as shy than not.

I am not shy. I divested myself long ago of the notion that I generally need to impress anyone to have sex. Even so, I am not “bold” either. I am neither intimidated nor intimidating… at least not intentionally.

But I was shy once. I remember all too clearly what that feels like, and I don’t mind being a generous ambassador for the club, offering a smile, a friendly touch and direct reassurance that every member is welcome and that we all want them to have a good time and want to come back. When guys tell me they want to come to an event but are shy I like to say, “That’s great! You should really enjoy the club. It’s perfect for shy guys."

Have you been to a JO club and experienced what I’m talking about here? I’d love to read your comments.